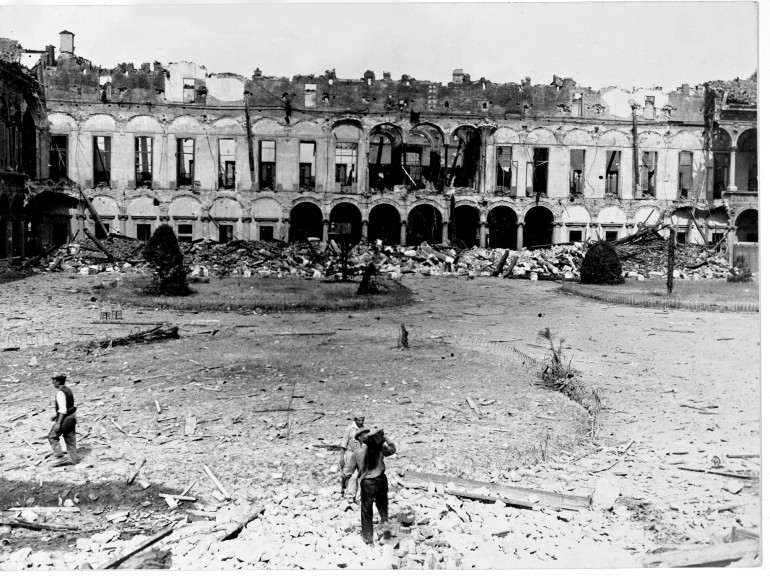 Not only factories, train stations, strategic military targets, the allied bombing of Milan in the period between October 1942 and August 1943 hit those sites that the population most related to, namely religious buildings, artistic and cultural monuments and even schools and hospitals, including, of course, Ospedale Maggiore.

The bombs that rained down between 13 and 16 August 1943 brought down part of the façade along via Festa del Perdono, destroyed the Central Courtyard, including the portico, and heavily damaged the lateral cloisters. The restoration of what could still be salvaged was due, above all, to the efforts of a great Milanese architect, Liliana Grassi (1923 – 1985), who not only reinvented what had been irremediably lost but also relied on a variety of techniques depending on the nature of the reconstruction work that was required.

The initial phase of the work focused on the rearrangement of the 19th century wing – the teaching wing – where a more creative approach was possible because the artistic value there was less significant than in the rest of the monument. The reconstruction through anastylosis of the Central Courtyard proved to be far more challenging and was ultimately terminated in 1958 with the inauguration of the Università degli Studi. As for the 15th century wing, work started in the 1960s focusing especially on the four cloisters. The delicate restoration work in this part of the edifice, as well as the reconstruction ex novo of several sections, relied on a sound methodology based on the rigorous analysis of contemporary documentation and iconography that allowed for the preservation of the original construction patterns. Architect Grassi’s work officially terminated on 31 October 1984, with the handing of the Crossing to the university.