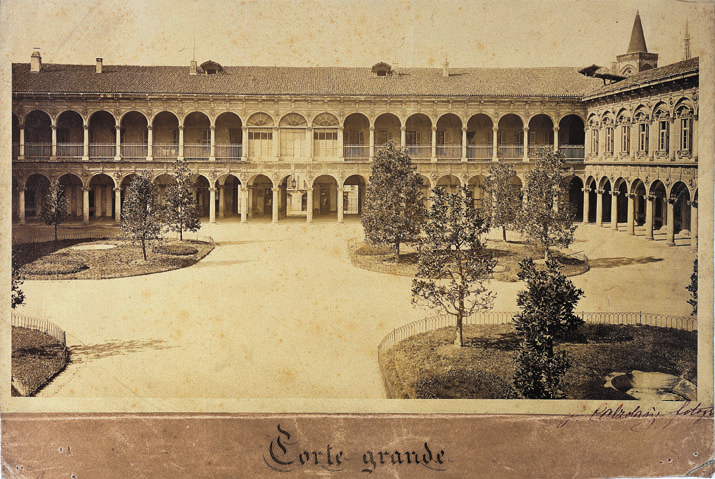 Designed by Filarete (Antonio Averlino, 1400 – 1469) in a layout consisting of three main bodies, the Ca’ Granda was left unfinished for a long period of time, until, that is, a very conspicuous bequeathal gave to the construction its long-awaited turnaround. In 1624, following the death of the tradesman and banker Giovanni Pietro Carcano, the hospital received half of the interests arising from his assets, a very consistent annual sum that was paid out for sixteen years in a row. Thanks to Carcano, who is remembered as the Ospedale Maggiore’s “second founder”, Filarete’s monumental complex was redeveloped and expanded.

The work initiated with Carcano’s cash principally involved the Central Courtyard, or the Cour d’Honneur, also named after Francesco Maria Richini (1584 – 1658), one of the architects involved in the redevelopment effort. The 17th century project had to take into account what had already been constructed over the previous centuries, namely the quadrilateral built at the time of the Sforzas (the win on the right) and the portico that connected it to the Central Courtyard Giovanni Antonio Amadeo (1447 – 1522) had almost finished by 1497. The 17th century work, which relied on the guidelines set out in the Filarete model for all four sides, completed the Central Courtyard starting from the entrance side. Work then proceeded along the front – where the construction of the Annunciata church started in 1635 – and, finally, on the right-hand side, where the portico was renovated, maintaining, however, the pre-existing decorative patterns.