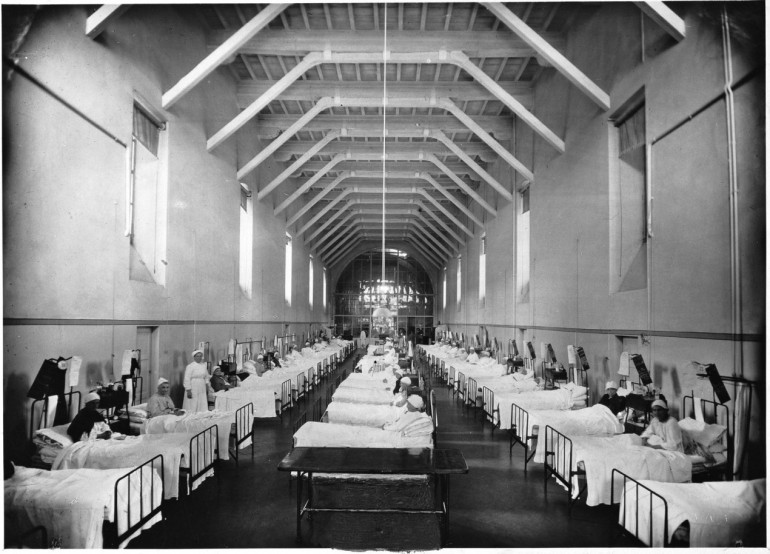 Work at the Crociera (Crossing) on the right – reserved, as the one on the left, for patients – started in 1459 and was terminated in 1465 under the supervision of Filarete (Antonio Averlino, 1400 – 1469). The foundations were in sarizzo granite, as the columns, and hosted service facilities, namely cellars, storerooms and workshops. Each arm had a name. The first to be built – perpendicular to the Naviglio – was dedicated to Bianca Maria Visconti and reserved to female patients. The entrance portal was decorated by a stone lunette depicting the Annunciation (1463-1465) by Cristoforo Luoni.

The arms of the Crossing were all endowed with acquaioli (stone washbowls) all having metal basins and buckets. Provided, right from the outset, with a sewerage system, the Crossing had toilets, which were called necessaria (“necessaries”) or destri (“nimble”). Among the priorities duke Francesco Sforza (1401 – 1466) had set were, in fact, the construction of an adequate number of toilets – one for every two beds – that Filarete envisaged being served, both horizontally and vertically, by running and rain water to ensure maximum and constant hygiene. Heating was provided by three huge chimneys. Alongside each bed was a small wall opening that acted as a cabinet and as a small table thanks to a wooden folding easel.

In 1472, duke Galeazzo Maria Sforza (1444 – 1476) ordered feather mattresses to be placed on the beds, and a year later patients started to be admitted for hospitalisation. The blankets were in leather and the sick, one for each bed, were given mixed wool vests, shoes and white caps (1486). At admission, the sick were undressed, washed and combed. The beds, warmed in winter, were made twice a day, and twice a day the floors cleaned and the rooms aired. In warmer summers, halfway up the ceiling, wet sheets were hung. By the 1490s, the Ospedale Maggiore could host up to 1,600 people, including both sick and personnel. In a bid to optimise space, new halls were created by adding mezzanines, in the arms of the Crossing, which remained in use until the 19th century.

Photo: Hospital ward in one of the crossings in 1880, by Farabola.
Image courtesy of the Archivio Fondazione IRCCS Ca’ Granda Ospedale Maggiore Policlinico.