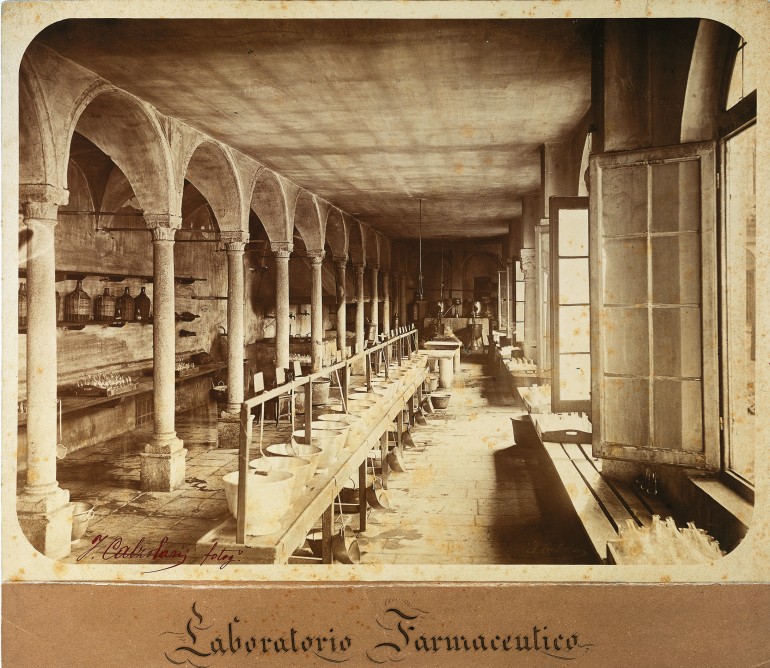 Designed by Filarete (Antonio Averlino, 1400 – 1469), the Cortile della farmacia (The Pharmacy Courtyard), although it was the first to have been constructed under his direct supervision between 1463 and 1467, was ultimately terminated by Francesco Solari (1420 ca. – 1469), brother of Boniforte (1429 ca. – 1481 ca.), with the help of the sculptors Guglielmo del Conte and Pietro Ambrogio de Munti, who made the columns and the capitals. Initially, the courtyard was designated to host the hospital’s administrative offices, among which the Chapter of the Deputies whose task was to handle hospital administration. It is likely, the pillars located in this exclusive location were covered with elegant decorations as can be observed by the traces of surviving framed graffiti depicting vases, endowed with curves in the shape of snakes, on whose rim birds are perched.

Work on the administrative area, which included the offices of the notary public, of the accountants and of the archives, was terminated with the construction of a hall, with fireplace (1468), that probably served as the capitulary. This was followed by the construction in 1502 of a refectory that was successively decorated by a mediocre reproduction of Leonardo’s Last Supper. It is likely the bread store was just next door. There also was, in the south-western corner, a well, whose curb was probably made by the sculptor Giorgio Gariboldi (1464). In the second-half of the 17th century administration was moved elsewhere and the premises it vacated were for the most part used by the pharmacy (laboratories, storerooms and storage rooms) including the green space at the centre, which was transformed into a small botanical garden.

The earliest mention of medicinal activities being carried out at the Ospedale Maggiore goes back to 1458 when Giovanni Vailati was appointed magister aromatarius. But it was only in 1470 that a formal agreement was signed authorising the opening of two chemist’s shops specialising in the administration and preparations of medicines exclusively for hospital patients. The finishing work of the decorations in the second pharmacy were entrusted to Stefano Cittadini in 1497.

Portico of the Infirmary