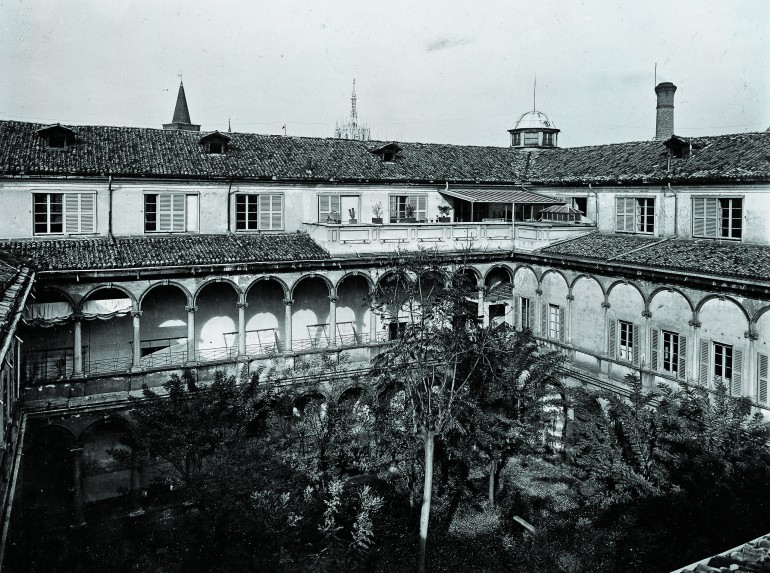 Work started at the end of the 17th century on the construction of the new left-hand side Crossing, which was terminated between the 18th and 19th century thanks to Carcano’s bequeathal, a conspicuous donation, amounting to 2,265,000 lire, signed out by the notary public Giuseppe Macchi in 1797. Three out of the new four courtyards were made in a style different to that defined in Filarete’s original layout. The only exception being the one reserved to the Ca’ Granda rector and his family, which was architecturally similar to 15th century courtyards and known as the Quarto delle balie, the ‘wet nurse quarter’ because it was located in a separate and protected part of the complex, thus becoming the designated area for wet nurses where they could breast feed infants in full privacy.

Following its significant enlargement, the hospital could now, in fact, take abandoned and undesired infant under its wing, weaning them and successively rearing them so they could be adopted. The long-standing attention for abandoned children and the respect for the rearing skills of women in the healthcare sector, prompted the hospital to establish in the 18th century – in the Age of Enlightenment – an obstetricians’ school. Founded in 1767 by Bernardino Moscati and reserved for surgeons, the school was successively opened also to “co-mothers” and “wet nurses” (i.e. godmothers and midwifes) who were at least 18-years-old and “learned in reading and writing.” The illuminated reformism of the Austrians in a Milan that was ever more receptive to science and technique soon turned the Ca’ Granda into a “teaching and specialisation hospital”.

The links between the hospital and Milanese society were further strengthened during the Risorgimento, especially during the uprising known as the Five Days of Milan (18-22 March 1848) when hospital doctors, healthcare staff, both men and women, took part in the events either aiding the wounded from both sides or taking up arms, combating on the barricades for the independence of Lombardy from Austrian rule.